Most novice painters are curious how detailed a sketch has to be to paint. The answer surprises most students. The sketch that is transferred to the canvas or is drawn directly onto to the canvas is pretty simple and does not include any shading except in the most general way and only that which can be done with the tip of the pencil or charcoal. Any excess charcoal or graphite makes painting difficult as it will mix with the wet paint and must be sealed or painted over in some fashion and allowed to dry and a lot of it does not allow the paint to adhere to the canvas very well so the less graphite or charcoal on the canvas the better. Detailed drawings in graphite, charcoal, or chalk, or watercolour, are often used in painting as references or to copy from almost exactly or to trace from when a live model or a photograph is not being used as the exclusive model during the sittings, but those drawings are done on paper and usually just used as reference and are not on the canvas. The picture below is the type of drawing I would draw directly on a canvas before painting and in most cases I would not need any more study than this if a photo or live model were still available. All of the corrections and “drawing” beyond the point would be done in paint with a brush in something like an umber wash to make a grisaille and dried and then light colour would be added as washes and dried and then scumbles and then glazes and so on as needed. Since people are not very patient and hosting a guest even in a professional studio is uncomfortable for everyone and can be expensive to the customer or to the artist in the case of hiring a model I suggest that for portrait painting the sketch should be “sketchy” and loose so that tones can be laid in as quickly as possible. Detailed drawings should be done from either photographs or when everybody has a lot of time available and everyone knows the commitment they are going to need to get the work done and when everybody is as comfortable as possible. Otherwise work as fast as possible and just get er done. As long as each layer is thin and you are working with fast drying paint in washes rather than glazes the work should go quickly. 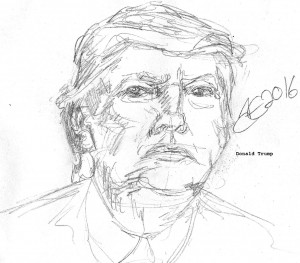