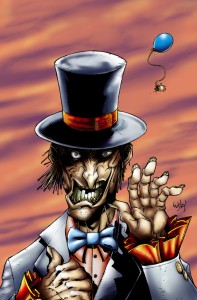 A major portion of my business comes from the production of comic books. I am a flatter and colorist primarily, but can also do lettering and layouts and miscellaneous jobs in the industry including full comic book restorations both of the lineart and color and other 2d and 3d stuff. A flatter prepares the lineart for the colorist by pre-coloring each object with a separate color in order that each object may be easily selected during the shading process. My standard fee for flatting is 15 dollars per page or 30 for double pages, etc. Along with flatting I also do digital coloring, lettering, and inking, but fees for those services vary depending on the difficulty and level of finish required so you’ll have to talk to me and show me some samples of what you have drawn to get an idea of pricing for coloring services. You can see my name listed among the credits of TopCow’s Witchblade issues 72, 73, 74.

I have worked on various comic books including:

How many pages have I worked on?  Well if I started counting in the year 2002 as of April 18th 2020 I have worked on 9,730‬ comic book pages.  And boy are my arms tired! (To put that into perspective the longest eleven Stephen King novels together are around 9,152 pages together. And since an average comic book has 22 pages I’ve completed around 424 full comic books and am still going strong finishing multiple books every month.)

The picture above is I colored for a contest for the title “Freakshow” and serves as a demonstration, but other coloring samples can be provided if necessary.