Last time we looked at some earth tones and stressed the importance of categorizing them by their dominant hue.  This time we are going to look at how applying the pigments in different ways and in different mediums can affect their dominant hue and tone.  Furthermore I thought it would be useful to show you examples of the actual colors we talked about in our last installment.

All pigments when applied as a glaze appear to be lighter if the glaze is applied over a lighter background simply because glazing is applying the pigment in a transparent medium.  For example if you begin with a white canvas and apply blue over that as an opaque paint the resulting blue will simply be the blue as it appears when wet in the medium you have chosen, but at full concentration.  However if we apply that some pigment over the white canvas as a glaze by adding a lot of medium so that the paint is not at full concentration in our mix the light will not be reflected by the pigment at all points but will pass through the transparent medium reflect off of the canvas and shine in our eyes.  If the pigment is itself transparent or semi-transparent some of the reflected light from the canvas will scatter at odd angles and pass behind some of the pigment and pass through it before entering our eyes back-lighting the pigment like sunlight when seen through stained glass.

The glowing effect that can be achieved with glazing is the primary reason masterwork paintings, especially those in the watercolor medium, appear to be so lively.  The effect of back lit pigment is exactly that of a transparent jewel being set in silver.  When a jeweler sets a stone in that manner the jewel appears to glow as though it is being held up to the sun even when the jewel is being lit from above.  The master uses a dual effect to draw the attention of the viewer first drawing their eyes to the piece by the strong reflected light caused by the polished surface of the stone capitalizing on tonal contrast and then using the light from behind to create luminescence enhancing the color of the rock.  We artists use pigments made from some common and some rare crushed rock, color-rich mineral stones, and common and precious metals, which are identical to those jewelers use we can look to the jewelers for inspiration and understanding as we develop our craft.  Just as the jeweler uses the dual power of tonal contrast and color enhancement we too must do the same when painting.  Glazing helps us accomplish this task because it allows opaque pigments to appear to be lighter than they are and it helps transparent and semi-transparent pigments to appear to be more colorful than they are.  There are other important aspect of glazing, but they deserve their own articles.

To help you understand how dramatically hue and tone can shift when using glazes I have prepared a chart for you.  For example I used six of the eight pigments from the Sinopia Historical Pigment Set available at Dickblick.com.  The chart shows the differences of color and hue of each of the pigments when used in four different ways.  Firstly as a dry pigment, secondly in a simple watercolor medium, thirdly in an opaque linseed oil, and fourthly the color seen when the pigment is in an oil glaze.  Photographs of swatches would have been more illustrative than solid colored circles, but my scanner is not terribly accurate at replicating color.  It picks up a little too much cool yellow light from the lamp.  I created these from photographic samples available at sinopia.com.  I encourage you to check the photographs there to see the full hue and tonal shifts seen when using pigments in different ways.  However I think that this chart proves the point well enough. 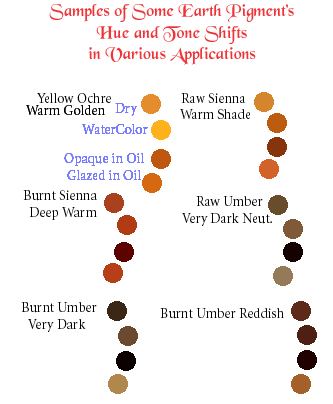