Feb 19, 2012 Step 1: Right now I’m doing an under-painting in oil for a portrait of the cast of The Vampire Diaries. I’m applying the paint as a series of glazes over a dark neutral background. I want to keep as much of the original background color as I can and use white only to raise the tone and black only to lower the tone without mixing each with the other.  The goal here is to use mostly transparent grisaille execution over a colored toned background.  Soon I will be making some videos on painting for everyone to see some of my process, but this will have to do for now.  Scroll down to see the next step. 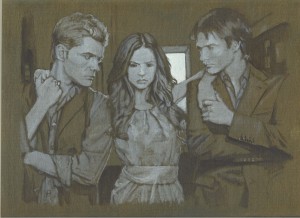 This is my UnderPainting so far

Mar 2, 2012 Step 2 : Haven’t had much time to work on the painting but here’s how the under painting is going.  I still need to refine the faces and adjust the tones on the skin a bit.  Then I may be ready for some color here and there, but I might refine the dress a bit more before that. 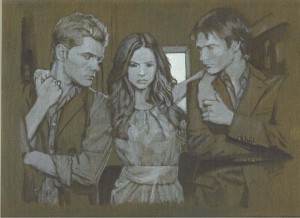 Feb 25, 2013 Step 3: Yes it’s been a long time since I’ve been able to work on this painting.  I can’t remember the last time but between then and now it’s just been sitting there gathering dust until I could scan it in to show you the progress.  Here I’ve started adding in color washes that also contained tonal adjustments.  I’ve tried to add the color in very gradually so as not to blow the monochromatic nature of the painting.  I think it’s looking pretty darn good considering the board is only 9×12 inches.  Ya, three torso tall figures abreast with some room for a background on 9×12 with all that detail.  Needless to say I’m using pretty small brushes, but it’s still a pain.  I might have to get my magnifiers out soon, I’m not as young as I used to be.  Honestly the detail is not as fine as I would like, but the rough texture of the canvas is bothering me. 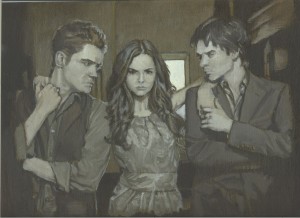 To get a smooth stroke the ratio of oil to pigment has to be just right and when working at a small scale like this the amount of oil you need is a bit difficult to gauge.  Especially so, when you don’t want to waste any paint by mixing up more than you’ll need for one session.  If you premix your paints and store them in tubes you can avoid some of those problems, but when working at a small scale it’s often better to have a high pigment content to achieve the same color density which means your paint would be expensive to use for larger paintings (which is one of the reasons acrylic paints made for painting miniatures is more expensive than regular acrylic paint) and a high pigment content makes glazing a bit difficult.

If you use too much oil or thinner (thinner is especially bad in this regard) in any case the pressure of the brush will deflect pigment away from the center of the stroke.  The pigment will be carried by the oil or the thinner and the pigment won’t lay under the brush during the stroke and remain where you placed it.  It will end up sitting on the outside of where the brush passed on both sides.  That sort of brush work can be used for other things, but it’s not what we are doing now and I had trouble with it in stage one because I had too much thinner in my mix.  I have learned since I began this painting so long ago that it’s better to not have any thinner in your paint at all in most circumstances but I wanted the painting to dry more quickly.  Now I know that I shouldn’t have bothered to worry about it.  It just made things harder than the benefit of having thinner was worth.  Thin layers like this dry fast enough on their own.  They say live and learn, and I did.

You might wonder if a heavier bodied oil would be worth trying out if you are having real trouble.  I wondered the same thing, but prefer using as few tools as I can and just controlling what I can through mastery of the few tools I allow myself.  I haven’t played around with a heavy bodied oil enough to know how it would affect a small scale painting either and I didn’t want to find out on a real piece I was putting together.  I’ll reserve that kind of experimentation for studies, but let me just say that it’s just not necessary, you just have to get the mix right.

Just remember if you don’t use enough oil the color won’t be transparent enough and won’t flow.  Remember we are applying the color as glazes, not opaquely.  But if you use too much the pigment will move around too much before it settles.  It just takes practice so don’t be discouraged.  Work on a larger scale, maybe a 12×12 canvas for a bust of a single person as a study until you figure it out for yourself and then experiment with other sizes.

Every pigment is a little different and even oil from the same company produced in the same batch can have a different body depending on how it was stored and transported.  Plus if the paint is allowed to sit out for a while, especially if it’s spread out into a physically thin layer it will begin to oxidize and harden.  (Some artists prefer it that way especially when applying the paint in a dry brush method.)  And so be patient, you’ll get better just as I have.

I realized that I needed to buy some more small brushes because my little ones are fuzzed out already from the rough texture of the first layer.

As you can see, most of the real work of the piece was done in the underpainting stage and now we are at what I call an undercolor stage which is where we start filling in colors to establish color relationships and we try, try, try, not to ruin the tonal ones established in the tonal underpainting stage (steps 1 and 2), but rather improve them.  The idea here is to warm the flesh tones and the background a bit and to fill in some colored areas of the clothing and hair while preserving as much of the former work as possible unless you notice it’s incorrect.  The clothing has gone from open hollow bodied shapes which revealed the tonal ground to solid bodies that block it.  That brings the figures to the forefront and give them a presence in the work.  Before they were ghosts, now they are vampires.  We aren’t finished yet.